I thought the following report could wake somebody?:

by Noah Kazis
New development in New Jersey's Warren County. The last decade has often been heralded as a "back to the cities" moment, a time when Americans have been excited to return to the walkable lifestyle many abandoned two generations before. A new report from New Jersey's Rutgers and Rowan Universities throws a little cold water on that optimism, though, pointing out that even the most densely populated state in the Union sprawls further out into the countryside every year.

Member blog Garden State Smart Growth picks out some of the report's lowlights:
Between 2002 and 2007, New Jersey’s rate of land development significantly outstripped population growth: population increased by only 1.1 percent, but the amount of developed land increased by 5.3 percent, nearly five times faster…
Since 1986, when these land-use data were first produced, the state’s development footprint has expanded by more than 25 percent, consuming an additional 323,809 acres, or about 500 square miles — an area larger than Cumberland, Monmouth or Morris counties

That's the price you pay for transportation and land use policies that make the car king: the loss of your open space, forests, and farmland. Garden State Smart Growth also points the finger at New Jersey's fragmented, hyper-local planning process as a contributor to the state's sprawl:
Lagt inn av Knut Bøe kl. 08:52


PRIORITY is the key for improved traffic

A folder explaining TrafficLogistics (both in English and Norwegian) will be found on this blog, please turn a few pages 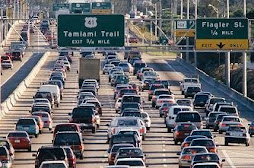